Three Pictures of Sexual Autonomy and Sexual Consent: Looking at the Second View

This is a condensed talk that I gave a few weeks ago at UW-Parkside. In the last post, I talked about the first view of sexual autonomy and sexual consent: procedural autonomy and consensual minimalism.

In this post, I’ll be looking at the second view: substantive autonomy and consensual idealism.

The substantivist form is more robust and is packed with a stronger view of what it means to be autonomous.  If a choice is made under certain conditions and/or the agent is of certain type, then we can say that the agent is autonomous.  The decision is not based on a subjective decision, but also some “external” criteria. 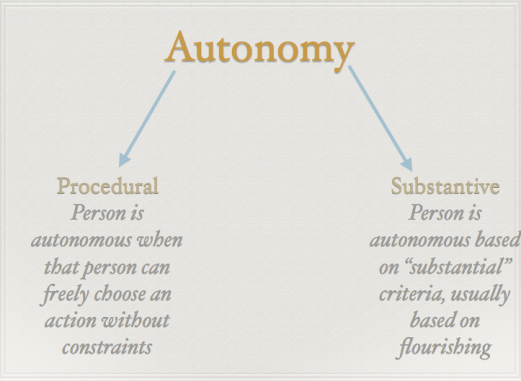 Part of the answer in the quote suggests that for any form of autonomy to be substantial, it must be because autonomy is either grounded or part of human flourishing, however we define that. Notice that if humans cannot flourish, they are not substantially autonomous. Moreover, the necessary conditions for an action to be consensual are voluntary, informed, and competence. However, for substantive autonomy, a choice must also foster the conditions for flourishing. Therefore, there is something underlying the autonomy, and what underlies it is some sort of virtue ethical consideration in order for the autonomy to get off the ground.

Under substantive autonomy, if someone has not met the normative conditions for autonomy typically identified by philosophers, including choices which have criticizable moral contents, then that person is not autonomous despite the freedom of external constraints. People’s psychology ought to hook up to the world in the right way. Whatever the case may be, the content of people’s preferences and values must correspond to some objective criteria of what is good for people. In other words, substantive autonomy is value-laden and oppression is never valuable. To be autonomous, then, is to be free from oppressive constraints, and these constraints can unconscious.

The type of consent that corresponds to substantive autonomy is what I call consensual idealism. Under this position, representatives argue that consensual minimalism is necessary, but not sufficient for the sexual activity to be ethical. Rather, there is a moral requirement that people ought to acknowledge and be responsive to each other’s needs, desires, and feelings.

Representatives of this position include West, Pineau, and Estes. I have mentioned West before. Pineau considers that our sexual relations should be based on a communicative model rather than the contractual model. Pineau extracts her communicative model from Kant in that we have the obligation to take the ends of others as our own. Thus, Pineau’s model of consent suggests that “if a man wants to be sure that he is not forcing himself on a woman, he has an obligation either to ensure that the encounter really is mutually enjoyable, or to know the reasons why she would want to continue the encounter in spite of her lack of enjoyment.”

Yolanda Estes adds two additional criteria: “each sexual partner exhibits concern for the other’s interests and needs insofar as their wellbeing includes and extends beyond their sexual wellbeing” and “each sexual partner attend to the other’s desires.” Starting with the first, without attending to the other’s interests and needs, the sexual interaction could undermine wellbeing. She points out that “sex without desire results in sensual or emotional dissatisfaction at best and physical or psychological trauma at worst.” If there is no interest in the partner’s needs and interests, Estes argues, then there is no concern for the partner. In shorter, non-committed sexual relationships, it becomes more imperative for clearer, explicit, and specific communication.This means we ought to take the time and communicate what the other person desires in order to mitigate any misunderstandings:

We can take time to gain some sexual knowledge of our partner by proceeding cautiously and unhurriedly in the initial stages of a sexual relationship. This increases the chance of correctly interpreting and addressing expressions of consent, expectation, and desire. Before, during, and after sexual interactions, we can solicit more explicit, specific expressions of our partner’s thoughts and feelings; observe our partner’s reactions carefully; and reflect diligently on what we hear and see. This enhances the possibility of reciprocal consent, concern, and desire while improving our sexual technique and our opportunity for a repeat performance.

Consent alone provides no immunity to moral reproach. Insofar as people show a respectful regard for a potential sexual partner, we cannot ignore our partner’s desires.

Let me offer some problems with substantivist autonomy and consensual idealism. A common substantivist problem is that there is a conflation between personal autonomy and moral autonomy—which is self-determination regarding how one ought to act. If substantive autonomy provides normative constraints on when people are autonomous, then, under this rubric, people are autonomous only if they make the moral, correct choice. Thus, the conflation: being autonomous does not necessarily mean being moral.

One problem with consensual idealism is that it seems false where one has no mutual desire or exhibiting some care or concern entails that the act is unethical. For example, sex workers, those who have sex to maintain the relationships (aka maintenance sex), and those who have sex purely for the sake of reproduction would not meet this criterion. In each of them, they want an end and which sex sex is a means to reach that end.

A second problem with consensual idealism is that some of the features are too high of a standard. For one example, suppose a newly couple wants to have sex. We can even assume that there is strong chemistry, and they consent to having sex. However, once they start, there is a bit of awkwardness: they see each other naked for the first time, one of them may be self-conscious, they fumble during sex which makes the experience sub-par, and perhaps one (or both) are thinking not directly about fulfilling the desires of the other, but more on the mechanics of sex, which detracts from their enjoyment.  Both are disappointed when the act ends. Yet, they want to give it another round at a later time. It seems that they did not mutually try to satisfy each other’s desires, nor did they exhibit concern for the other’s sexual well-being, at least not directly. This is not the ideal sex act, but it does not make the act unethical.

Another problem—which relates to the last—is that people, especially when they are novices or feel uncertain about sex, may not know what they want. They may engage in various activities for curiosity, experimentation, trial and error, or simply “just to try it out.” There is no mutual desire to be had since one is not sure what sort desires one has. Moreover, younger people are still figuring out their own sexual-well being, which includes what sort of values and boundaries they are comfortable with. They may not enthusiastically say “yes” because they are not sure what they are enthused of, yet they still want to have the sexual experience for the reasons mentioned above.

In short, consensual idealism ignores the context of the sexual actors and possibly places too high of a standard.

Let’s take stock and see where we’re at right now. In terms of consensual idealism and consensual minimalism, we can see that they have different standards and different perspectives on what is permissible or not. Consensual idealism has higher standards and therefore, anything that falls below that standard makes the sexual activity morally impermissible. Remember the case of Monica in the last post? We can place her on the chart and see why consensual idealists would find that what happened to her is unethical, but the consensual minimalists would consider what happened to her as ethical, albeit perhaps not the best of all situations.

These two views of consent have been the dominating pictures, but they seem to have many problems. I suggest we need to relook at consent, and I can do so by looking at another view of autonomy.

In the next post, I’ll be looking a third picture of sexual autonomy and sexual consent.

I am an assistant professor (LTR) at Dalhousie University. My ideas are not associated with my employer; they are expressions of my own thoughts and ideas. Some of them are just musings while others could be serious discussions that could turn into a bigger project. Besides philosophy, I enjoy martial arts (Kuk Sool Won), playing my violin, enjoying coffee around town, and experimenting with new food.
View all posts by shaunmiller →
This entry was posted in Autonomy, Consent, Ethics, Paper Topic, Sexuality and tagged Consensual Idealism, Sexual Autonomy, Sexual Consent, Sexual Ethics, Sexuality, Substantive Autonomy. Bookmark the permalink.

3 Responses to Three Pictures of Sexual Autonomy and Sexual Consent: Looking at the Second View