My Experience at the National Sex Ed Conference 2017

Posted on December 13, 2017 by shaunmiller
Recently, I went to the National Sex Ed Conference in Atlantic City this past weekend. It’s definitely different than a philosophy conference. Most of the workshops were about how to teach sex ed to students which were mainly geared toward K-12. It’s definitely not philosophically rigorous, but there were a few tidbits that I found helpful. I’ll mention a few highlights and see if I can garner some philosophical insights from these ideas.
1. I went to a workshop on touch and how important it is. We seem to be a touchphobic society. Touch doesn’t necessarily have to be erotic. Yet, at the same time, to be constantly touching and being touched can be exhausting. Touch, it seems, can deplete the self. This brings up a philosophical point: how essential is touch to the self? We seem to want touch to those we care about the most, and not so much from strangers. Touch also has gender components in that females are more comfortable to touch whereas males not so much. But as for touch, imagine never being touched and imagine never touching. We would lose out on some relational aspect of who we are. Indeed, what makes us who we are is how we relate to other people and one component of this is touch. Touch, then, constitutes the relational self. Without touch, we would loose a sense of who we are as a relational being.
2. One workshop talked about the sexual citizenship. One of the interesting questions that was posed is how to discuss using drugs and sex. One of the common narratives is that those two should never mix and that sex should always be done sober. I can understand the reason why, but I also found this too strict. Does that mean sex and alcohol should never mix? What about when the people are buzzed? What about if someone doesn’t want to have sex unless they’ve had a few drinks? What about a long-term couple who’ve known each other for a long time? Can’t they drink and then have sex afterwards? This isn’t to say that the mixture of alcohol and sex can have the same quantity, but I couldn’t find the language of how to explain the context. It wasn’t until this workshop that I heard the speaker discuss it well.  Basically, it’s better to get a handle of your alcohol intake (or whatever drug you choose) so that you can know what levels you can handle sensibly. It’s also better to know your sexual activities sensibly as well. Make these two activities separate. Once you get the hang of it, then mixing sex and drugs can work, but don’t just jump into it. You’ve got to know the comfort levels of yourself, your partner, and the context. Each mixture is going to be different for the people involved.
3. One thing I’ve learned is how race is tied up with sex education. This idea comes from a variety of workshops and from a keynote speaker and admittedly, it was a weak point in my knowledge about how race is connected. So I will take a combination of what was said for this point. What I enjoyed about this idea is the intersectionality of the whole topic. Think of the sexual stereotypes we think of when it comes to different races. By associating those stereotypes, we see people in terms of what they are sexually capable of and that may inform whether we want to have a relationship with them.
The other idea had to do with racial microaggressions and and how that relates to sex ed. Here is how the microaggressions can build up:

Not my image. Taken from Anti-Defamation League

What I really like is how it starts off with the social norms and customs. They are the unwritten, informal ways of excusing various behavior. But once that becomes coded in society, then they become discriminatory on a civil level.
To discuss the issue then, there are two strategies: one is meet them where they’re at, and then nudge them forward. If you advance to where you want to talk about without first breaking down the myths and false beliefs of the students, they’re going to rebel and take the new knowledge seriously. So you must first meet them at their epistemic level and try to show why those beliefs are not only unjustified but also unjust. Once that is down, they need another foundation and it is here you can nudge them toward just and justified beliefs.
Second, data can change your mind; stories changes the heart. Data can only do so much. Change people’s beliefs can only do so much. Now they have to take on that data and make it personal. They have to not just believe the new narrative but also be committed to it in where it affects them. Moreover, once they hear the story, they can feel a personal connection and have a harder time denying it. What’s funny is that denying data is considered ok because there isn’t a person there. Denying a person, however, seems to ignore the humanity and/or dignity of that being. Place some stories in your education. Maybe bring in people who are affect by a certain policy or social norm to connect the students to the position.
4. Finally, there was one whole workshop that I found really insightful. The workshop was about how to teach consent and positivity in a school setting that is abstinence-only. The key is that we need to develop skills for these students, but these skills are not just restricted in the sexual realm; rather, it’s a skill that is helpful for the whole person. So for example, when it comes to consent, it’s not just for sexual activity. Consent is a helpful skill for all sorts of affairs. So then, how do you teach them these skills that the students need, but not lose your job because teaching comprehensive sex ed could be illegal? The answer is to teach students skills that can be helpful in fostering healthy relationships. The skills are knowing what you want and knowing how to ask for it. Here, we can break it down: 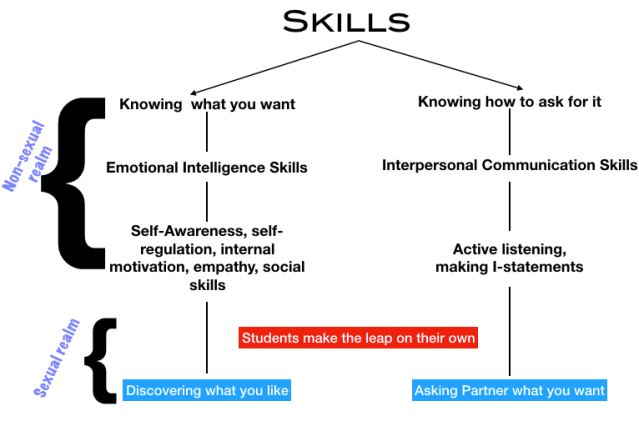 Notice then that the argument is an analogy: if we can teach students these skills in a non-sexual realm whereby these skills are useful for any activity in their life, then hopefully, these skills will transfer to the sexual realm. Or this argument could be a genus-species argument. Teach them these basic skills for everyday life and one instance of everyday life is sexual activity. Here, the method isn’t really important, but it’s the application and whether that transfer can be done. I’d be interested to see some data to see if analogy and genus-species is more psychologically grasping for the students. But overall, I like this strategy. It’s to teach social and emotional learning, which sounds very similar to sex education. If you provide the examples that they’re familiar with right now, then the abstract thinking will come later. Indeed, the examples that resemble sex or relationships, the better so that the students can come away with these skills.
One question I had was whether students might not consider this a good analogy? We are bombarded with messages that sex is somehow different than other activities and so if the skills work for the non-sexual realm, they may not work for the sexual realm just because they are very different activities. The presenter suggested that we should teach them what you can and hopefully they can make the leap. It’s not a completely satisfying answer, but without psychological research, this is the best we can do. Overall though, I think there’s some promise and that we can start with non-sexual examples to teach healthy relationships and consent, and then hopefully nudge them toward what a healthy sexual relationship looks like.
I did get to meet some big names such as Lizz Winstead and Dr. Ruth Westheimer: 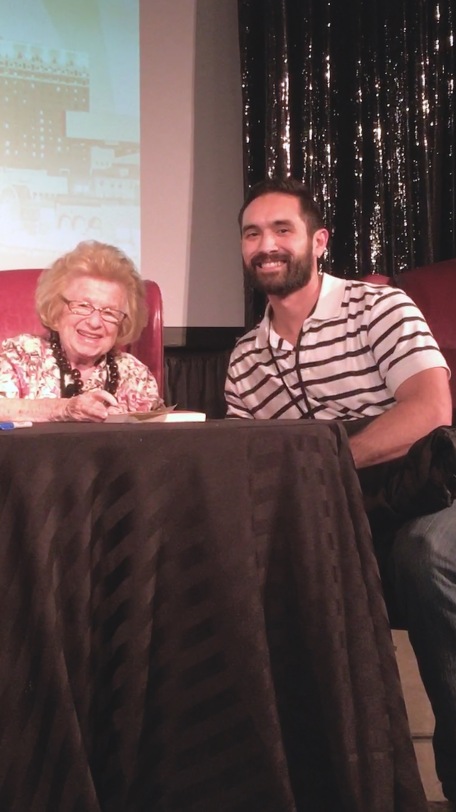 This was my first time attending a conference like this so I wasn’t sure what to expect. Overall, I may attend another one and perhaps even facilitate a workshop. In the end, I’m glad I attended and I hope that I can contribute to the field with my philosophical background.

I have just completed a visiting position as an assistant professor at Dalhousie University. My ideas are not associated with my employer; they are expressions of my own thoughts and ideas. Some of them are just musings while others could be serious discussions that could turn into a bigger project. Besides philosophy, I enjoy martial arts (Kuk Sool Won), playing my violin, enjoying coffee around town, and experimenting with new food.
View all posts by shaunmiller →
This entry was posted in Conference, Sex Education, Sexuality and tagged National Sex Ed Conference, Sex Education, Sexuality, Sexuality Education. Bookmark the permalink.