Continuing to Believe in Falsehoods

An article about two months ago in The New Yorker is about how and why people believe in false things. Specifically, how and why someone continues to believe in false things even if that person was shown evidence that the belief is false. As an example, there are many people who believe vaccination contributes to various problems and disabilities such as autism. However, these people were given various facts from science and stories showing that vaccinations are not only helpful, but that there was a scientific foundation that vaccinations do not cause these problems.  These facts were given to those who already believed that vaccinations were problematic. The results were quite revealing: none of those people changed their minds. If anything, those people were more emphatic about how vaccination causes problems. Why is this? Why do people continue to believe false things even if they are given evidence to the contrary? It has to do with your identity, an understanding of who you are with the world around you.

Not all false information goes on to become a false belief—that is, a more lasting state of incorrect knowledge—and not all false beliefs are difficult to correct. Take astronomy. If someone asked you to explain the relationship between the Earth and the sun, you might say something wrong: perhaps that the sun rotates around the Earth, rising in the east and setting in the west. A friend who understands astronomy may correct you. It’s no big deal; you simply change your belief.

But imagine living in the time of Galileo, when understandings of the Earth-sun relationship were completely different, and when that view was tied closely to ideas of the nature of the world, the self, and religion. What would happen if Galileo tried to correct your belief? The process isn’t nearly as simple. The crucial difference between then and now, of course, is the importance of the misperception. When there’s no immediate threat to our understanding of the world, we change our beliefs. It’s when that change contradicts something we’ve long held as important that problems occur.

This study also dealt with political ideologies such as climate change, Obama’s birth certificate, or “death panels” in the latest Health care debate.  One can show evidence to the contrary and the people even acknowledge the new evidence, yet “strongly held beliefs continued to influence judgment, despite correction attempts—even with a supposedly conscious awareness of what was happening.”  Given a choice between being right or having a coherent identity, we’d rather take the coherent identity.  “False beliefs, it turns out, have little to do with one’s stated political affiliations and far more to do with self-identity: What kind of person am I, and what kind of person do I want to be? All ideologies are similarly affected.”

Why is this tied up with our identity?  When it comes to knowledge and beliefs, we form a web where all of these beliefs cohere together.  Some of these beliefs you can easily discard once you find out they are false.  Other beliefs, however, we keep even if shown falsely because if we discard these strong beliefs, then our identity, worldview, and our story of how we see our self shifts radically.  Think of it this way.  Suppose you believed that an acquaintance’s favorite food was ice cream.

Later on, you find out that the belief is false…

But now let’s do something more risky.  Suppose that your best friend are out at a restaurant and you order some food.  You have been friends with her for since elementary school and you know the ins and outs of her.  You feel confident that you know her well and that she knows you well.  Indeed, you treat her like a sister.  She orders a dish and you notice that what she ordered is a vegetarian meal.  You ask her why she ordered that particular dish when there were many other options that you considered better.  She replies that she is a vegetarian, and that has been for a long time.  In fact, she’s dismayed that you didn’t know this because she’s always ordered vegetarian meals for quite a while.  So your original belief was like this…

You are shocked by this because all this time, you thought she ate meat.  You begin to think back at the moments when you two did hang out.  You never really noticed what she ate or ordered because the meal was just something you don’t remember.  But, still, you find it surprising that you never knew this.

Now this is a bit riskier than knowing an acquaintance’s favorite dessert, so it restructures your self a bit, but not greatly.  Notice that the entire thread is gone.  You can replace this belief with ease, but you still find it surprising.

But what about something that is more central to who you are?  When we think about who we are, our environment and worldview constitute our own identity.  When we see that those things are questioned, our identity is questioned too.  To illustrate, suppose you found out that you were adopted and you never knew that until now.  Suppose that your friends aren’t really your friends, but are actually part of a cabal trying to spy on you.  Or suppose that you are deeply religious and that you’ve had these convictions for a long time. 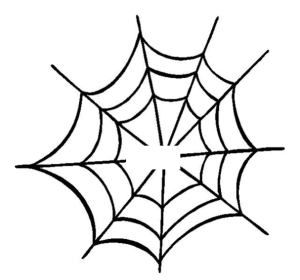 All of the sudden, those religious beliefs are under scrutiny.  Suppose also that those sources are reliable.  In fact, religious beliefs are typically so central to one’s identity, that questioning them makes people out of place, confused, our a total breakdown of the self.  Their worldview must be reoriented because religion was so central in how they see the world, the truth, and how the self fits into all of that. 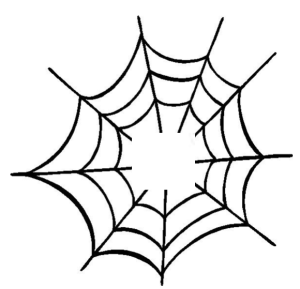 Why can’t you quickly change your beliefs “The religion of X is true” to “The religion of X is false/questionable/not accurate” as easily as changing the belief about your acquaintance’s favorite dessert?  It is because the former informs your selfhood, your identity whereas the latter does not.  The center of the web is gone.  You cannot just simply replace a center with another center; you’ve got to rebuild it through your own experiences, worldview, and reason.  Eventually, however, this new core belief will re-center you, and thus your identity.

As soon as you have a sense of who you are, with a new worldview, you begin to see the world differently, and other people differently perhaps.

As time goes on, you begin to regain a sense of who you are slowly but surely. 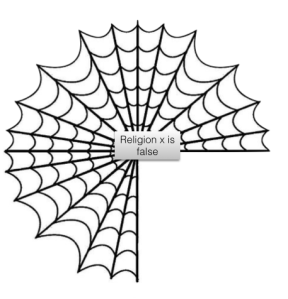 Our identities are not “things” that we have, but they are constituted by our culture, our environment, and our upbringing.  Without those things, we don’t have an identity.  Our identity seems to be so sacred to us that we’d do anything to make sure that our identity is ordered rather than fragmented, even if it means having false beliefs.  Otherwise, we lose our sense of self, and we become lost.  It almost sounds worse than being physically lost because this sort of “being lost” is something that is with you until you can figure out who “you” really are.

I picked religion because that is the easiest example that I think most people can relate with in terms of identity crisis.  But again, you could replace it with something else that would unstable your identity and sense of self.  The point is this: we hold on to certain beliefs, not necessarily because they are true (although we hope they are), but because getting rid of them questions our sense of who we are, and that seems to be scarier if we got rid of that.

In many ways, we can get this.  In other ways, this seems troubling.  How can we be sure that the beliefs we have are true but also get a sense of who we are?  The article didn’t talk about how to resolve this, but it does give a tone of despair that people are reluctant to give up false beliefs, not because the beliefs are important, but because one’s identity, in virtue of beliefs, is not something that can be bargained.

I have just completed a visiting position as an assistant professor at Dalhousie University. My ideas are not associated with my employer; they are expressions of my own thoughts and ideas. Some of them are just musings while others could be serious discussions that could turn into a bigger project. Besides philosophy, I enjoy martial arts (Kuk Sool Won), playing my violin, enjoying coffee around town, and experimenting with new food.
View all posts by shaunmiller →
This entry was posted in Article, Epistemology, Paper Topic, Personal Identity and tagged Article, Beliefs, Epistemology, Identity, Paper Topic, Personal Identity, Self. Bookmark the permalink.