Is There Such a Thing as “Good” Sexual Objectification? (Part One)

Posted on November 4, 2014 by shaunmiller

It is assumed that sexual objectification is morally wrong.  To be clear, sexual objectification is to treat someone as an object of sexual pleasure—in short, a sex object.  So to make sure one is not sexually objectifying another person, or that you are not being sexually objectified, one should make sure that one is respecting the other person’s autonomy, and that the other person is respecting your autonomy.  The obvious way to do this is to make sure that there is consent on both sides.  On the other hand, people can be so inflamed with passion that some objectification happens in order to receive pleasure and increase the arousal on both sides.  Most people don’t find this problematic as long as the people involved are consenting. 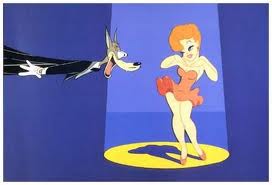 Objectification, in some cases then, is permissible because the people involved are comfortable with each other; they’ve known each other for a long time and they’re familiar with each other’s nuances, susceptibilities, and what buttons to push or not push.  However, part of this view also declares that any sexual activity that excludes any sort of familiarity with the other person is bad objectification, and some sexual activities that lead to bad objectification would be pornography, prostitution, and casual sex.

Given above is what is called “the Standard View” and Patricia Marino, philosophy professor at the University of Waterloo, and co-president of The Society for the Philosophy of Sex and Love, challenges the view. In this post, I will explore why.  I’ll be looking at her paper, “The Ethics of Sexual Objectification: Autonomy and Consent” and will bring in my comments along the way.  I’ll be rearranging her paper in order to justify the premises of Marino’s argument.

Before I start, we need to get some terms down:

With these other two possible positions, we can describe both the pessimistic view and the libertarian view.

The Pessimistic View: All sexual activity involves using another person and is therefore morally wrong.  Catherine MacKinnon and Andrea Dworkin hold this position, which stems from the feminist argument that marriage and interaction of the sexes has been patriarchal and any sexual activity is always detrimental to the woman.  Kant also holds on to this position, but he gives an ad hoc argument that the people involved can escape objectification through marriage.

The Libertarian View: Marino explains: “All sexual activity, as long as it is consensual, is morally benign” (p. 346).

So far, we’ve explained three possible positions regarding the permissibility of sexual activity and a fortiori objectification.

Strong Instrumental Use: “utter disregard for the autonomy of the other.”  For example, A uses B completely as an instrument without any regard for B’s desires, feelings, wants, or ends.  Moreover, mutuality, symmetry, and intimacy don’t help here.  This sort of instrumental use is morally wrong.

Weak Instrumental Use: there is no violation of the other’s autonomy, yet we have little concern for the other’s ends, desires, or general wishes.  Marino uses the example of asking whether she may lay her head on her lover’s stomach as a pillow, without worrying whether her lover has some unexpressed desires to do some tasks.  So we respect the person’s autonomy by respecting their decisions, but we don’t concern ourselves with their wishes and desires in general.

Now we can get to the argument.  Overall, Marino’s argument relies on an analogy: 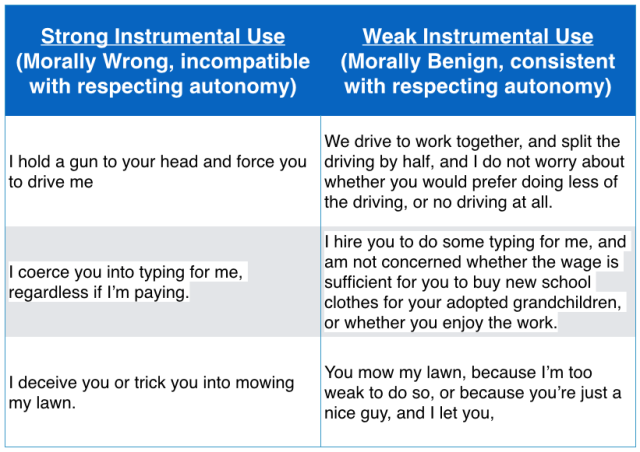 Consent is associated with respecting autonomy.  And to be used is to disrespect one’s autonomy.  This is the typical argument regarding consent and autonomy that one could use to argue against Marino:

The argument is valid, but Marino will argue it’s not sound.  In fact, she states that one can consent to being used, thus denying the conclusion.  She argues that premise D is false because:

A can respect B’s autonomy while using B sexually as a means in this weaker way. (p. 356)

But D is just a conclusion from B and C, which means she must implicitly reject B and/or C.  She doesn’t reject C because to objectify someone is to use them for our benefit as explained above in the different senses of “objectification.”  Thus, she must reject B.  Let’s introduce a new premise B’.

B’.  If Persephone sees Siegfried as autonomous, then Persephone can objectify Siegfried but in a weak instrumental sense.

This also changes E to E’:

E’. If Siegfried is autonomous, then Persephone can use Siegfried only in the weak instrumental sense.

Imagine I dress up in a micro-mini skirt and high-heels, intending to give sexual pleasure to those who see me, and unconcerned about both the nature of that pleasure and whether it is reciprocated. It seems I have consented not just to being looked at, but to being looked at in a certain range of ways, unspecified in advance, and also to a certain mode of interaction. If I put sexually suggestive pictures up on the internet (as many people of both sexes do), intending for others to see them and sexually enjoy them, it doesn’t seem quite right to say that I am consenting to an interaction; what I’m consenting to is being used for sexual pleasure. This suggests that it makes more sense to say that one can consent to being used than to say that consensual activities are ones in which a person is not used after all; it is in this sense that we have more than a mere verbal quibble. (p. 356)

One can still weakly use another for one’s own purposes, and yet still consider the other as autonomous if the other’s consent is ongoing.

This is an interesting picture of consent.  So far, I agree with Marino’s first argument in that premise one is correct because it fits with one of Kant’s categorical imperative that we should treat people as an end and never merely as a means.  Strong objectification treats people merely as a means whereas weak objectification treats people as both ends and means.  I find premise 1. correct in that regard.  But what about Marino’s argument that consent is not about agreeing to an activity, but to a mode of interaction?

Suppose that Persephone and Siegfried both discuss their likes and dislikes sexually.  They both agree that doing sexual activity X has its charms and can be pleasurable, the process and aftermath of X is messy, time consuming, and only appropriate when they are “in the proper mood” and “in the right moment.”  Persephone and Siegfried agree to meet for a quick sexual encounter where the sexual activity will be standard, meaning that it is not the right moment to do sexual activity X.  Neither of them are in the mood to do X; they both just want “the usual.”  During sex, however, Persephone gets lost in the moment and begins sexual activity X.  Siegfried doesn’t expect this, but because of Persephone’s engagement in her pleasure, Siegfried gets in “the proper mood.”  Now, they engage in sexual activity X because it is now “the right moment.”  After the sexual encounter is over, both of them are happy, and were quite surprised that they did X because neither of them expected it.  Now, did they consent to the activity?  I would say yes because they both had a voluntary informed mutual exchange of agreement.  But did they consent to the mode of activity?  It’s hard to say.  They both went into agreement expecting “the usual” and not even bothering to think about X.  Notice with Marino’s description above, one intends to sexually arouse others by putting up photos online, or by wearing a micro-mini skirt.  But Persephone and Siegfried didn’t intend to do X.  Yet, by doing X, they still consented.

However, Marino does mention that being attentive to the partner’s consent is ongoing.  Did Persephone and Siegfried have ongoing consent?  Yes, even though there was no intention.  Persephone started sexual activity X, and Siegfried did not expect X to happen, so he may have been thinking, “Oh, we’re doing X now?  Ok, I’m totally down for that.”  In that sense, Siegfried consented to the activity.  The mode of interaction changed to a different mode, however, because both of them initially expected a certain kind of mode of interaction.  The ongoing consent could mean that one consents to a mode of interaction to another mode of interaction, but if so, then there is a consent that goes above consenting to activities or modes of interactions—a meta-consent if you will, and one must be continually attentive to this as well.  Or one could argue that this is the same mode of interaction, but the mode expanded during the activity.  I fear that I’m going too tangential in this territory, however, so I will investigate this further perhaps in another post.

In the next post, I’ll continue to look at Marino’s argument and investigating the next few premises.

I have just completed a visiting position as an assistant professor at Dalhousie University. My ideas are not associated with my employer; they are expressions of my own thoughts and ideas. Some of them are just musings while others could be serious discussions that could turn into a bigger project. Besides philosophy, I enjoy martial arts (Kuk Sool Won), playing my violin, enjoying coffee around town, and experimenting with new food.
View all posts by shaunmiller →
This entry was posted in Article, Casual Sex, Ethics, Sexuality and tagged Article, Autonomy, Casual Sex, Ethics, Sexual Consent, Sexual Objectification, Sexuality. Bookmark the permalink.

4 Responses to Is There Such a Thing as “Good” Sexual Objectification? (Part One)