Posted on December 8, 2008 by shaunmiller 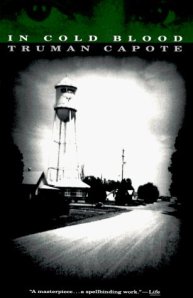 This book is considered a classic nowadays.  It’s virtually assigned to most high schools and college English classes so I thought I’d give this a whirl.  Almost everyone I hear recommends it, so I had this expectation to be this amazing book.  After reading it, I can understand why it has such cultural importance and it is original, but overall, I think the book is overrated.

To start, the book is considered original because the author was doing a human interest story on the murderers.  The people who were murdered was a tragedy, but the author only spends about the first 70 pages talking about them, their upbringing, and their lifestyle to give you a sense of who they are.  It’s an interesting thing that Capote does because throughout the story, he presents the murderers in much more detail, but only giving you the facts.  I’ll explain this later.

It’s based on a true story of a murder that happened in a rural town in Kansas in the late 1950s.  It was a brutal murder.  The murderers came across the Clutter family and killed them point blank with a shot gun blast.  It’s set up in such a way that the murder just came out of nowhere and that was brilliant on Capote’s part.  Usually there’s some foreshadowing or at least some sort of tension.  But no, it’s just an ordinary day followed by conventional events that gives no hint of any ominous events about to occur.  Right after the murder, of course everyone is shocked, but none more so than the reader.  It brings the reader into the story because the reader now feels that s/he knew who the Clutter’s were and that you’re just as shocked as the rest of the townspeople that they were murdered.

Usually with murder stories, there’s a sequence that must follow:

However, In Cold Blood breaks a lot of rules.  From the very beginning, you already know who the murderers are.  The sequences goes like this:

In an interesting way, it works.  In the first five pages, you already know who the murderers are.  But to make it interesting, you don’t understand why they did it until the end of the book.

As I’ve said before, Capote just tells you the facts.  This was one of the disadvantages of the book.  I felt like I was reading a newspaper article that lasted over 300 pages.  So just constant reading of facts can get tiresome.  However, this is something that works to Capote’s advantage.  By just giving the facts, Capote isn’t making any judgments on the murderers; he only tells you about their upbringing and their situation.  It’s perfect because you feel some sort of sympathy for one of the murderers because of exactly his upbringing.  You felt that he was just at the wrong place at the wrong time.  And you get this from facts!  These facts play into your sentiments and you produce some emotional bond with at least one of them and that’s what makes this story captivating.

So on a scale of one to four, I’d give it a two.  It’s worth reading, but don’t think it stands as the best book there is.  Why such the low review?  Besides the style of the story, which is original, the plot and the story itself isn’t.  It’s a murder story and that’s how it stands.  However, I do think it is worth reading once.

I have just completed a visiting position as an assistant professor at Dalhousie University. My ideas are not associated with my employer; they are expressions of my own thoughts and ideas. Some of them are just musings while others could be serious discussions that could turn into a bigger project. Besides philosophy, I enjoy martial arts (Kuk Sool Won), playing my violin, enjoying coffee around town, and experimenting with new food.
View all posts by shaunmiller →
This entry was posted in Book Review. Bookmark the permalink.

6 Responses to Book Review: In Cold Blood by Truman Capote