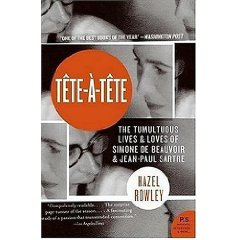 I was in for a treat reading this book.  I have always been interested in the philosophies of Jean-Paul Sartre and Simone de Beauvoir.  Part of this interest deals with their relationship(s) and the other people involved.  I never knew it was so intricate and complicated.

Just to get a glimpse, Sartre and Beauvoir do not believe in monogamy (or marriage for that matter).  This is part of their existentialist creed: love (and marriage) takes away freedom and makes the other person into an object.  By doing so, love disappears because you do not want to love an object, but a subject.  Therefore, “true” love is where you respect the other person’s freedom.  Sartre and Beauvoir considered themselves an “essential” relationship but they were aloud to have “contingent” affairs as well.  And boy, do they have many.  What I expected was that they had a relationship, but the “contingent” affairs were their own “private” time, a time to get away from each other.  It turns out that these other people were brought into the intimacy of both of Sartre’s and Beauvoir’s lives.  Beauvoir even introduced some women to Sartre so that he could get “involved” with them.  But Sartre always took care of them.  He ended up taking care of nine women, including his mother and everyone considered each other “family.”

Rowley does a very good job getting the story rolling.  I felt like I was reading a novel instead of a biography of people’s relationships.  It also progresses into their development and how this influenced other people.  Now a big misunderstanding is that people think that since this deals with philosophers, it will have lots of philosophical ideas in it.  Well, that’s not the point of the book.  The book’s sole subject was the relationship itself, not really the philosophical ideas (although it is sort of the backdrop for the book so that one can get an understanding of the relationship itself).  I thought this book was well-researched, moves smoothly, and I felt like I was part of the “family” because I felt I slowly got to understand Sartre’s and Beauvoir’s relationship better.  To the end, they were “together” for 51 years (until Sartre died).  They certainly had good loves, and I am sure they had a great life.

I have just completed a visiting position as an assistant professor at Dalhousie University. My ideas are not associated with my employer; they are expressions of my own thoughts and ideas. Some of them are just musings while others could be serious discussions that could turn into a bigger project. Besides philosophy, I enjoy martial arts (Kuk Sool Won), playing my violin, enjoying coffee around town, and experimenting with new food.
View all posts by shaunmiller →
This entry was posted in Book Review, Existentialism, Monogamy, Sexuality. Bookmark the permalink.

6 Responses to Book Review: Tête-à-Tête, The Tumultuous Lives and Loves of Simone de Beauvoir and Jean-Paul Sartre by Rowley